The ceremony, held under sunny and pleasant skies, drew Don Heinzen and friends and members of his family, Mayor Bill Brandt, city aldermen, and others for cookies and lemonade and a look inside the massive and attractive all-weather structure.

The dedication came 13 months after the ground was broken on the project, which was funded by a diverse mix of public and private resources.

The dedication celebrated the completion of the project and was an opportunity to thank those that made the project possible, Repp said.

The pavilion is already home to the active Farmers’ Market every Saturday along with a mix of other events, including Music in the Park on the evenings when inclement weather moves the concerts indoors.

We have also had inquiries for new community events potentially hosted within and around the facility, Repp said. We are excited to work with various groups, organizations and individuals as they utilize the facility for various activities, programs, and get-togethers.

The pavilion is located on the south side of Sixth Avenue just west of Field Street, and will serve as the linchpin for the revitalized park that now fills the area that once served as an industrial beltline.

The stunning, all-season structure is open-sided with a cantilevered roof. Garage doors line the walls, and can be pulled down to create a substantially-enclosed structure in the event of inclement weather.

Heinzen and his late wife, Audrey, provided $150,000 toward the project, a key part of the financing.

Funds were also provided by the Remington Foundation, which supplied the initial $25,000 to kick off the work, and the Department of Natural Resources, which awarded a grant worth $224,000 from its stewardship fund. 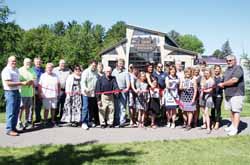 Don Heinzen, along with members of his extended family,
and city officials clip the ribbon dedicating the Heinzen Peaceful Valley Pavilion.