The manufacturer, which recently relocated to a former elementary school northeast of Antigo, was the brainchild of fisherman and innovator Frank Suick. He developed the now-famous Thriller in the 1930s after studying the feeding habits of the fish on Pelican Lake, which was located just a short ride on a Chicago and Northwestern freight train from Antigo. 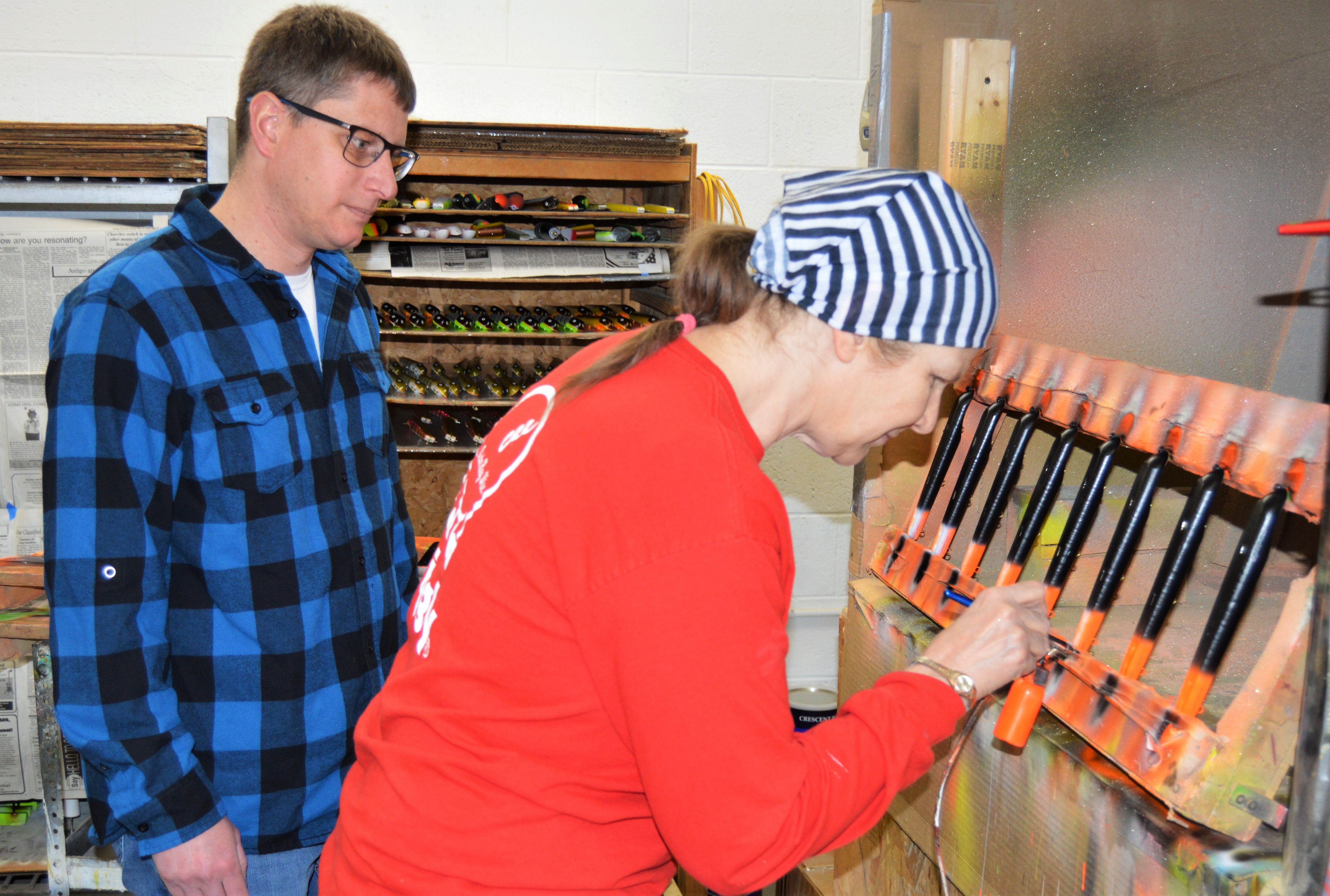 Mike Suick, fourth generation owner of Suick Lure Company, watches as Holly Reynolds hand-paints a lure
at the company’s production facility northeast of Antigo, Each Suick Thriller is hand-made, with over 1,000 styles,
color combinations now being produced and sold throughout the United States, Canada and overseas.
Before the Thriller, muskies were caught by casting or trailing suckers behind a rowboat.  Suick figured out a better way, developing a wooden lure with an adjustable stainless-steel tail that allowed it to be “tuned” to various depths. It provided an eye-catching flash that muskies couldn’t resist.

It was a huge success, with Frank Suick once catching 30 muskies in 30 days. He mounted and displayed many of his trophies at the family’s downtown Antigo tavern, which soon became known as Suick’s Muskie Bar. The display drew a steady mix of gawkers and serious fishermen, all angling to learn the secret of landing those monster fish, and he began commercially producing the lure in 1939.

From the start, it was a family enterprise. Frank’s sons, Pete and Jim, took over the lure business in 1951. Third generation owner Steve, who is Mike’s father, bought out Jim in 1980 and is active in the company today. Pete remained involved until his death in 2021.

Developed for the Northwoods, the Thrillers have become known as one of the most productive lures ever designed. Illustrative of the company’s growth and range, there are now over 1,000 different styles and color combinations now being produced and sold.

Building on its successes, Suick Lures purchased the Cisco Kid line of lures in 1993, moving production to Antigo from Boca Raton, Florida. Muskie Mojo, which features the Weagle, was purchased in 2008, and Shack Attack, with soft plastic lures, added in 2013.

“Everything is made by hand here in Antigo. We manufacture almost all of our components,” Suick said. “That’s something that’s extremely unusual in this industry.”

The purchases are all designed to complement, not compete with, the Suick Thriller.

“These are all different types of lures for completely different markets,” Suick said. “We are actively seeking out different corners of the market and constantly seeking to broaden our horizons.”

From its rural Antigo base, Suick Lure Company ships out its products across the U.S. and Canada as well as overseas.

“Every year there is more competition but for every three companies that start up, two disappear,” Suick said. “We stick with it. I see future growth as a company.”