Author:
Antigo Daily Journal
Source:
Antigo Daily Journal
The St. Patrick’s Day parade at Pickerel, one of the benchmark late winter events in the northwoods, got rolling shortly after noon on Saturday with temperature in the area of 17 degrees and winds at 12 miles per hour out of the north. They combined for a chill reading in the area of four degrees, but most of the hearty were not to be deterred.

An excellent crowd turned out in downtown Pickerel for the festivities, which is usually billed as a good excuse to blow off a little steam to mark the date of the death of St. Patrick, the patron saint of Ireland. He died in 461 A.D.

Weather conditions may have scared a few from the exposition, but not that many. But by the time the procession ended, some of the crowd had faded.

Lil’ Hummer’s Hideaway Bar/Grill and Campground, at Pearson, was the first-place winner in the parade competition, and Uprooted, which provides sewer services throughout area was second and tied for third were Hollister Gardens and St. John Church senior exercise program.

Led by fire trucks, one of them passing out flavored ice treats to the already chilled crowd, the parade continued for quite some time. Snowmobile trail grooming equipment, businesses and floats entered by organizations spiked the event.

Several of the hospitality spots in the Pickerel area were serving excellent corned beef sandwiches and corned beef and cabbage, one place had a band and another, karaoke.

While there was variety to be had in the Pickerel area, action moves to the Antigo area where advertising for the events starts in the Tuesday edition of the Antigo Daily Journal. 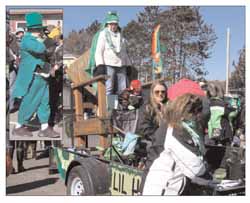 Larry Schisel served the crowd shots while the float for
his business rolled down Highway 55 to a first-place win Saturday.