The tour will come to the Langlade County Fairgrounds on Saturday, April 13. Doors open at 11 a.m. with the event getting underway at 1 p.m. All proceeds will benefit Langlade County Habitat for Humanity. 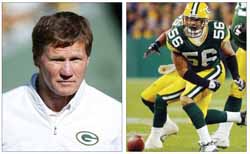 Packer President/CEO Mark Murphy and alumnus Nick Barnett
are among those who will visit Antigo as part of the Tailgate Tour on April13 .

“The Packers are excited to embark on the 14th annual Tailgate Tour and visit with fans in central, western and northern Wisconsin,” Murphy said. “We're proud to be supporting a variety of excellent nonprofit organizations during the tour and joining our fans in making a positive impact in their communities.”

The tour will include a tailgate party, with tickets priced at $40 each. There will be food, giveaways, question-and-answer sessions and autographs.

In addition, general admission tickets will be available for $10, which include access to the Q-and-A sessions as well as tailgate party activities.

Food and beverages will be available for purchase.

Tickets for tailgate parties will go on sale Friday at 8 a.m. Local outlets include Game On on Edison Street, Pick 'N Save, and Lakeside Market.

The tour will take place aboard a customized motor coach emblazoned with the “Green Bay Packers Tailgate Tour” logo and the phrase “Touching Down in Your Community.” In addition to the designated locations, tour celebrities will make surprise stops as the schedule allows.

One hundred percent of the Tailgate Tour proceeds will benefit the hosting organizations.