On a Wintery Day, Summertime Music Information is Distributed

The weather chatter surfaced at a meeting of some of the people who lead the summertime Langlade County Music in the Park program, who were celebrating the printing of the advertising material that promotes the popular programs that operate in Antigo, White Lake, and Elcho. 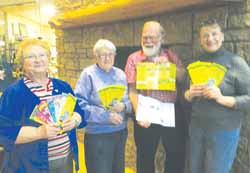 Four of the summer music series supporters got together today at Langlade Aspirus
Hospital to distribute programs for the upcoming season and discuss plans.
From the left: Sharon Gibson, Lil Tower, Nick Salm and
Judy Peterson, who steers the program in White Lake.

One of the park program's promoters and ardent fans, Nick Salm looked out the window at Aspirus Langlade Hospital, where the meeting was being held, assured that the list of musical talent at the three venues assures that better times are coming.

His list showed they will be good times with many of the favorites back on the Antigo park bandstand and the museum at White Lake and the community pavilion at Elcho.