Enjoy some “Ebony & Irony” this weekend at North Star Lanes.

Nationally-acclaimed comedian Bob Zany is making his springtime trip to Antigo and he is bringing a friend, Jimmie Walker, for shows Friday and Saturday night.

Zany's known for his appearance on the “Bob & Tom” radio show and is also appearing in the new “Casino Boss” television series starring Joe Piscopo.

Walker is best remembered from the 1970s “Good Times” television show and his “dy-no-mite” trademark line.

Together they have been touring the country off and on for months with “Ebony & Irony: Hilarious Together in Perfect Comedy,” itself a take-off on the 1982 duet between Paul McCartney and Stevie Wonder, “Ebony and Ivory.”

Walker and Zany promise it will be great fun. 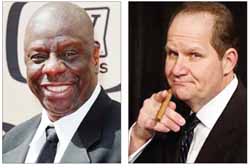 “The Zane-Man is well-worth the time,” Walker said, stressing that his friend is among the hardest-working men in comedy today. “The great Zany is deep pooling in the business end of it. I give him tremendous credit.”

Zany, who has been coming to Antigo for half-a-dozen years, said the two nights of shows give local audiences a chance to see two professionals at work.

“My show translates everywhere, from Las Vegas to the Midwest and Antigo,” he said. “The bottom line when you are doing a comedy show, is people want to laugh, and that's what we provide.”

Zany has performed across the nation and Europe and is known for reaching into a seemingly bottomless grab bag of jokes. He said he generally tries about three new jokes every show, constantly honing and refining his act. He's also known for one-on-one interaction with the audience and being very quick with a comeback.

Walker was a television superstar on “Good Times,” airing from 1974 to 1979 as a spin-off of “Maude” and “All in the Family.” His catch-phrase “dy-no-mite!” has become part of the modern vernacular and he became such a major celebrity that Time Magazine named him “Comedian of the Decade.”

The two men say they have fun getting together and performing.

“It's a good mix,” Zany said. “People coming to our shows are seeing two professionals.”

Saturday's show is a dinner show, by advance tickets only. They are available for $125 per couple at Neve's Floors-to-Go & Furniture. Doors open at 5 p.m. with a tenderloin dinner at 6 p.m. and the show at 7:30 p.m.

Friday's show will be at 9:30 p.m. with the doors opening at 9 p.m. Tickets, are $15 and will be available at the door. There will also be a corporate show, for holders of those Saturday night tables, at 7 p.m.

The event is sponsored by Antigo First.