Northern Wisconsin towns depend on snowmobile recreation to survive. So volunteers stepped in to clear damaged trails

On that front, a national nonprofit rode to the rescue.

Team Rubicon assembled an operation to clear roughly 20 miles of snowmobile routes over a 10-day deployment that began Sept. 28, focusing on obstructions that hampered travel in the sprawling trail network following a powerful July 19 storm.

Breanne Durovic, a volunteer with Team Rubicon, checks with a colleague as the nonprofit group worked this month to clear the edges of a snowmobile trail of fallen trees in the Chequamegon-Nicolet National Forest. "You want to be able to help your neighbors out," said Durovic, who lives in Chicago. The area was devastated by windstorms July 19 and 20. Reopening snowmobile trails is considered vital to the rural region's economy.  (Photo: Larry Parnass / For the Journal Sentinel)

Deb Uhlenbrauck of the Chute Pond Snowmobile Club served this fall as a local liaison for the volunteer effort. Uhlenbrauck said many small businesses in or near the Chequamegon-Nicolet National Forest are in the hole financially because of the storm, which knocked out power for nearly a week.

“They’re still trying to make that up,” she said. “If you take that away from them, they have nothing. We’re economically depressed here.”

For the second operation this fall, nearly two dozen sawyers were out cutting daily to clear obstacles in the network of trails.

“That was a huge request that hadn’t been fulfilled yet. We knew how important that was to the local economy,” Bruton said.

A map on the wall of Team Rubicon’s borrowed headquarters in Riverview was festooned with blue sticky notes indicating points of concern.

“40 ft. wall of trees,” one note read, with a line indicating a section of trail.

“They were able to clear that in one workday,” Bruton said.

Nearby, Rick Kolomay, the team’s operations section chief, had two maps going — one indicating the current deployment in the woods and another tracking goals for the coming day.

Maggi Thomas, Team Rubicon’s midwest territory planning manager, said the group prepared for six weeks before arriving in Riverview. “We knew the devastation, but it was definitely eye-opening. There’s a lot of destruction out there.” 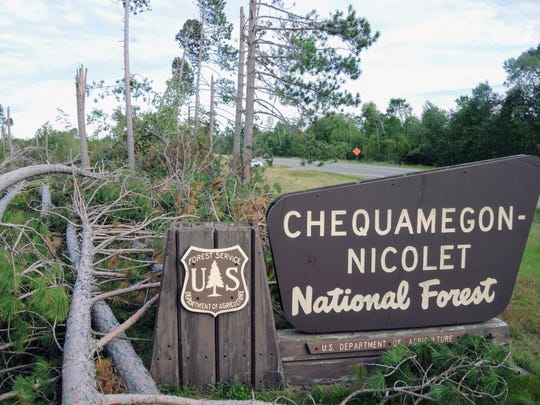 Trees sheared off at heights of 10 to 15 feet are a common sight in the Chequamegon-Nicolet National Forest following a severe windstorm July 19 and a smaller storm the next morning. The damage is noticeable to travelers on Route 32 between the towns of Riverview and Lakewood.  (Photo: Larry Parnass / For the Journal Sentinel)

“If they can’t make connections, then people can’t snowmobile through the trail,” Uhlenbrauck said from her home on Anderson Lake, as she prepared to host a thank-you dinner for Team Rubicon.

Two days before, Gov. Tony Evers visited the Team Rubicon headquarters to be briefed on its work.

Uhlenbrauck was home July 19 and watched the approach of the squall line. “Think I best move out of this room,” she recalled saying to herself.

Falling trees struck her family’s garage and truck. A 150-foot pine made a direct hit on her boat lift.

Later, out inspecting trails, Uhlenbrauck came upon 8-foot walls of downed trees. “I was standing there and felt like a midget,” she said. “Devastation. Almost complete devastation of the forest. It was a domino effect.”

Gary Wagner, president of the Red Arrow Snowmobile-ATV Club, said that one crew came upon a 300-yard section of trail clogged by a 15-foot pile of downed trees.

“It was just one big bank of trees right in the center of the trail,” Wagner said. "Somewhere underneath all that stuff is the trail.”

Without the nonprofit’s help, Wagner doubts there would be a snowmobile season in his area. “What they’ve done is beyond description to help us. Without them, we wouldn’t have anything open.”

RELATED: It could take 10 years for Wisconsin to recover from the violent July wind storm that wrecked northern forests