Author:
Antigo Visual Arts
Source:
The horse racing mural recently put up on The Thrivent building, 711 Fifth Avenue in Antigo, has a history.

David Markgraf on Needs Grass, Don Rice on Dixie Lee, Dick Beattie on Twilight Lady, Buzz Kaiser on Porter’s Brush, Joe Bera on Green Carpet, and Pete Helmbrecht on Sundancer surge into the stretch of the Langlade County Fairgrounds racetrack in a scene common for much of the 20th century here. 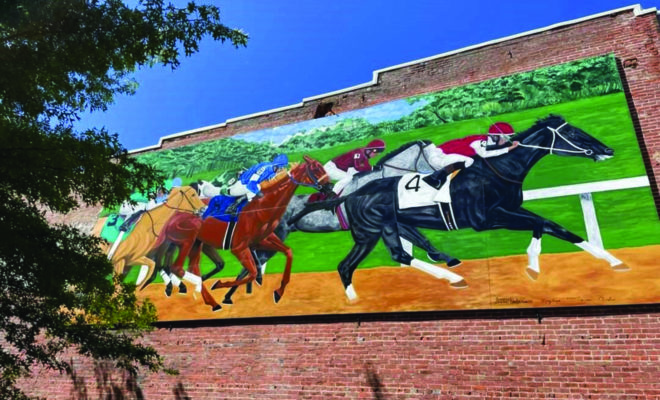 In the 1960s, the Wisconsin Horse Racing Association was formed in Antigo, creating a professional racing atmosphere. Horsemen traveled a circuit stretching from Antigo and Shawano to Keshena, Fond du Lac, and, eventually for some, to the professional tracks in Illinois, Kentucky, and elsewhere. The 1970s brought Rotary Derby Days, which continued into the early 1980s.

Although racing’s heyday in the Northwoods is long past, the old “Leaky Roof Circuit” spawned many renowned professional horsemen, including Kentucky Derby-winning trainer D. Wayne Lukas, who is enshrined in the Racing Hall of Fame.

The mural was designed and painted by our own Linda Robinson with the help of Mary Hayes, Camille Converse-Smith, Olivia Lemke, Fran Brown, and many other helpers from Antigo Visual Arts along the way.

Our Antigo Visual Arts Public Art Committee would like to thank the City of Antigo, Remington Foundation, CoVantage Credit Union, and of course Nate and Kezia Musolff from Thrivent for all their help.