MC Country Fest is the work of Molly and Chris Held (constituting the M and C in the festival’s title, respectively), the owners of Held’s Bar and previous coordinators of the famous FuddFest. On the 40 acres of land that used to serve thousands of festival goers during the month of the August, the music venue and camping party that was formerly FuddFest returns August 10th in its new form.

The bar pavilion at the MC Festival grounds just before MC Rock Fest in June.

As FuddFest went on for 14 years running before its final festival, Molly Held worked for her parents by booking the necessary acts and taking care of the in-house coordination. Using that experience to now promote her and her husband’s festival revival, MC Country Fest is in the hands of experienced music venue veterans.

Featuring more local acts as the festival kicks off its first year, the room for expansion based on MC Country Fest’s success is seemingly endless. Growth will bring about more nationally-renowned country musicians in the future and from its early onset, word of the festival has reached many that either enjoyed FuddFest’s celebratory past or look forward to MC Country Fest’s new music and party atmosphere. As of midway through this past week, approximately 400 of the 850 available campsites were already booked – still with over two weeks to go until showtime.

MC Country Fest will be held on the same grounds as FuddFest, land that Molly’s parents purchased in 1993. After converting the land space into the venue grounds, the addition of four stages along with the addition of a converted town hall and beautiful log music hall, measuring 80 by 120 feet with three bars inside, provided attendees with the music experience that lasted for nearly a decade and a half. After years of the grounds being closed, the Helds began organizing this summer’s events back in January, including MC Rock Fest that was held in June. After spending two months of the spring cleaning up and preparing for the future, MC Country Fest is ready to kickoff in a couple weeks’ time. 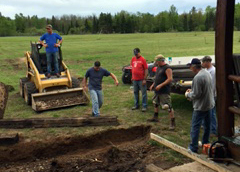 Workers fixing the side stage ramp this past spring.

“We have some great friends that have really helped us,” Molly Held said. “We’re moving on [with the festival] and we wanted to continue this tradition.”

MC Country Fest also features its fair share of local food vendors, including the famous Optimist Club cheese curds every day of the event. Kelly’s Concessions of Birnamwood, a staple of the past FuddFest, will make their return to the new venue where they’ll be serving up fried fish and prime rib sandwiches amongst other delicacies. For the early-rising campers, Down the Hatch Café will be serving breakfast every morning in the old town hall as well as featuring a snack stand that will be open all night long.

The camping grounds open as early as Saturday, August 5th with closing marked for Sunday, August 13th. A camping package is $150. For gate admission, it is $25 per day or $50 for the entire weekend. For more information about the event, please email mcfests@gmail.com or call (715) 216-3215.