With the first snowfall just tickling the northwoods overnight, Langlade County snowmobile clubs are in the midst of a Herculean task.

But support from outside the area is coming.

This week, volunteers from the Lily Sno-Birds Snowmobile Club welcomed some heavy equipment from GNR Equipment of Black Creek and Mountain's Chute Pond Snowmobile Club. The group worked along the Wolf River State Trail near Hollister, clearing the massive blowdowns that remained following the July 19 windstorms. 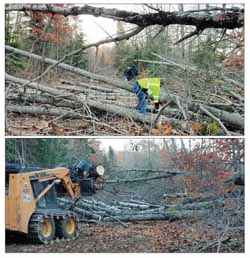 The trail was impassable and unrecognizable in sections, according to Club President Jim Hoffman.

It was also dangerous, he said, with the twisted trees and widow-makers making it impossible for volunteers with chain saws to complete the work.

“The downed trees in places were stacked eight to 15 feet high, twisted, loaded and bent ready to spring in a direction hard to determine,” he said.

Despite the willingness of volunteers, it was a job for professionals.

“It would have taken years to clear it all because of how bad it was along that trail,” Hoffman added. “We had experienced guys but the work was just wearing them out. We needed heavy equipment.”

Hoffman put the call out and Chute Pond Trail Boss Kevin Uhlenbrauck, Bill Nikle and GNR owner Rob Laabs came to Lily with two trucks and trailer loads of equipment, including a Skidsteer with grapple hooks and operator.

That was key, Hoffman said.

“As fast was we could cut, Rob and his Skidsteer moved 20 foot logs from the trail,” Hoffman said, Monday afternoon. “I think at one point we had seven guys with chainsaws and he kept up with us.”

Hoffman said that with the volunteer help, almost three miles of heavily damaged trail was cleared over two days.

“When I said desperation was setting in and I needed heavy equipment, this is what I was talking about,” he added.

More work remains, Hoffman said, and later this week crews will be moving to the Crocker Hills segment for another work day.

Across the count, volunteers have been clearing the trails used by snowmobilers, all-terrain vehicles, skiers. hikers and hunters as the impact from that July 19 windstorm continues to reverberate across the region.

The Lily Sno-Birds, Tombstone-Pickerel, Elcho Sno-Devils, and Northwoods-Boulder Lake clubs all had extensive damage on their trails, and have been working on cleanup since right after the storm,” County Forest Administrator Eric Rantala said. “It is amazing how much work they have put in to get the trails ready to go.”

Volunteers led by Chuck Wetzel have cleared the Moccasin Trail for skiing and snowshoeing as well, but major work remains to be done on the Jack Lake trail system.

“Some of the trails can't even be seen because of all the trees,” Rantala said. “ We have a loop or two open but I suspect we will not have all the trails open this winter. The trails are so wet we have not been able to get equipment in.”