It will be a familiar venue to the young men, both Antigo High School veterans fast-becoming Kids veterans.

Shows are at 2 and 7 p.m. and are sponsored by the Antigo Rotary Club. With two local performers, it is certain to be a packed house.

Tickets are $12 in advance or $14 at the door and are available through Rotary Club members or at BMO Harris Bank, Chase, City Gas, Copps Food Center, CoVantage Credit Union and Lakeside Market.

Cuellar, now in his third year with Kids, is a son of Trini Cuellar and the late Lucy Cuellar. The 2015 Antigo High School graduate is a keyboard specialist.

Brown, son of Leigh Brown and Michael Brown, graduated from Antigo High School this past spring. The singer and dancer was a Kids alternate in 2016 and 2017 marks his first full season with the group.

Performing since 1969, the Kids kicked off its 49th season in West Allis on June 22. By the season finale at the Wisconsin State Fair they will have reached 50 to 60 different venues and entertain approximately 120,000 audience members.

The Kids will arrive in Antigo after a Monday visit to Wisconsin Rapids and leave directly afterwards for a performances on Wednesday in Rice Lake, Thursday in Stevens Point and then back to Milwaukee and southern Wisconsin on Sunday.

Kids will also perform the national anthem at the Milwaukee Brewers’ Aug. 2 game against the St. Louis Cardinals.

Kids includes 33 members between the ages of 15 and 20. There are 13 band members and 22 singer/dancers.

Troupe members travel, perform and live together all summer, with a home base at the Tommy Thompson Youth Dorms at the Wisconsin State Fair.

The Kids from Wisconsin program was conceived and developed in 1969 by the late Mark Azzolina at the behest of then Wisconsin State Fair Board Chairman Herbert P. Velzer and Fair Administrator Vernon G. Wendland. They were acting on a request by Gov. Warren P. Knowles who, given the turbulence of the late 60s, wanted to show the nation the best face of Wisconsin's youth.

Azzolina, hand-picked a musical staff to select and train the Kids at their first 17-day camp. More than 400 young entertainers were auditioned, and 60 achieved positions in the first edition of the Kids from Wisconsin.

Since then nearly 900 young artists have participated in the program with many going on to excel as performers, music educators, college professors, entertainers, choreographers and top professionals in a wide variety of fields.

In 1982, Kids from Wisconsin, Ltd. became an independent, non-profit corporation. A board of directors was formed. A contract was negotiated with the State Fair for daily performances during its 11-day run each year. 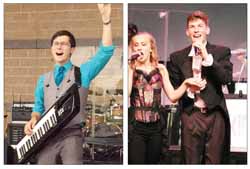 Isaac Cuellar, left, and Brennon Brown, Antigo High School alumnus,
will be on the Volm Theater stage when the Kids From Wisconsin perform here on Tuesday.