In the 1920's, Elcho Was an English Tudor Village

Author:
Gary Entz
Source:
WXPR Radio
In 1923, a fire in Elcho resulted in a dramatic shift for the way the Langlade County town looked.

Gary Entz has the story for this week's A Northwoods Moment in History.

Most Northwoods communities have undergone numerous changes during their existence.  The original wooden buildings of the late nineteenth century gave way to modern brick and mortar buildings as the twentieth century progressed.  It happens everywhere, but in some cases the change is more dramatic than most, and none was more visually dramatic than the change that overtook the town of Elcho in the 1920s. 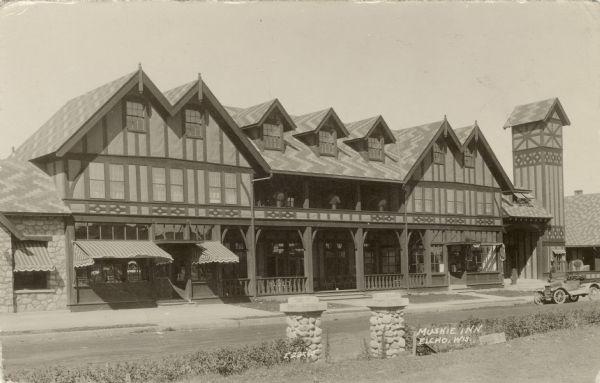 Exterior view of the Muskie Inn in Langlade County on a postcard.

Elcho is a small town in Langlade County just north of Antigo.  It was platted in the early 1880s and received a post office in 1887.  There are conflicting stories of where it derives its name.  One story says that the Lac du Flambeau band of the Ojibwe people bestowed the name on the region.  The other story says that the name is derived from the Scottish Lord Elcho and Elcho Castle in Scotland.  Whichever story may be true, the town of Elcho, Wisconsin, developed similarly to many other Northwoods communities; that is, as a haphazard jumble of wooden buildings centered around a lumbering concern.  In Elcho that was the George W. Jones Lumber Company, which just prior to the turn of the century became the Charles W. Fish Lumber Company.

Elcho was like many other Northwoods communities until February 17, 1923.  On that night a fire started at 11:40 p.m. in the central heating plant located underneath the drugstore.  A high wind ensured that the fire would spread.  Although community firefighters had the blaze contained by 4:00 a.m., the damage was severe.  The general store, bank building, telephone office, drug store, hotel, and rail depot were all destroyed.  The Fish Lumber Company vowed to rebuild the town, but a second fire in September swept through the lumber yard and destroyed that establishment as well.

Nevertheless, Fish was a wealthy man.  Rebuilding had already progressed over the summer of 1923 and the loss of his lumber buildings was not going to stop him.  Fish was a man who genuinely wanted to beautify his community.  He had dreams of the English countryside in the Northwoods, and through his personal finances he did just that.  Fish rebuilt Elcho as an English Tudor village with one long half-timbered building constructed to house most of the town’s commercial interests.  A department store, bank, drug store, hotel, barber shop, dentist’s office, rail depot, and Fish’s own lumber offices were all housed in this Elizabethan building.  Boarding houses were moved to back streets to make room for a new Tudor-style clubhouse.

Elcho was one of the most architecturally striking towns in Wisconsin, but the future did not go so well for Fish.  The Stock Market crash of 1929 and ensuing Great Depression ruined Fish financially and forced him to leave Elcho.  In the succeeding years much of his Tudor dream was re-sided or destroyed to the point where only parts of it can still be seen today.


CREDIT:This story was written by Gary Entz and produced for radio by Mackenzie Martin (WXPR Radio). The photo above is used with permisson from the Wisconsin Historical Society and can be found on their website here.