Thanks to a herculean effort of trail clearing from dozens of local organizers and volunteers, the derby trail was ready for action after suffering significant damage in the July wind storm.

Racers and their canine counterparts got a taste of the variety of Northwoods autumn weather, with snow flurries and a dose of wind Saturday, brilliant sunshine Sunday morning, and cool temperatures both days. 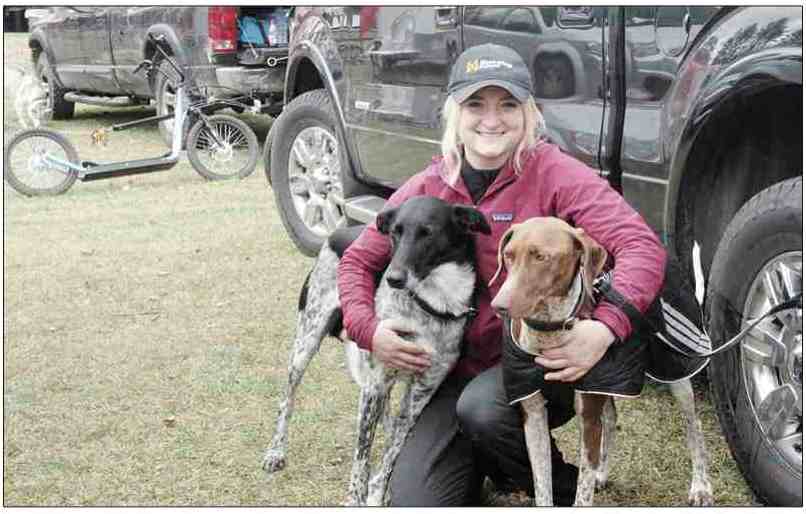 Niina Baum, along with Focus and Molly, take a break between races at the Dirty Dog Dryland Derby Saturday afternoon.
The Derby was Baum’s first event since traveling to Sweden recently to compete in the dog-powered sport World Championships.

A glance at the race sheet tells the story of the broad draw of the Dirty Dog event. Local racers from Gleason, Deerbrook, Elton and White Lake hit the trail alongside teams from Hagerstown, Indiana, Lebanon, Missouri, Algonquin, Illinois, Waconia, Minnesota, and Mancelona, Michigan.

The event even drew teams from Alaska and Canada, competing in four and six dog cart races, one and two dog scooter, one and two dog bikejor, and canicross, where the human and dog run together with a harness line between them.

Niina Baum of Rhinelander was one enthusiastic racer, and her story illustrates the passion of participants in dog-powered sports. The week before Dirty Dog, Niina, her dog Molly, and their scooter made the trek to Stockholm, Sweden to participate in the World Championships.

“The terrain there was very similar,” Niina said. “I landed in Stockholm and I thought I was still in Wisconsin! But the competition was just ridiculuous. Not only are the dogs super athletes, but the people are super athletes. It really put things in perspective for me as far as how the sport is progressing globally.”

While her Swedish racing experience was an eye-opener, Niina maintains that the Dirty Dog is the best race of the year.

“I’ve been here every single year since this event started,” she mentioned. “I come here with my family, get to reconnect with friends, its organized well, the trail is great, the food is great, its just a great race.”

Racing truly is a family affair for Niina. Her brotherin-law and cousin raced this weekend, her father and sister have raced in the past, and this year there was a new participant: her fiveyear-old nephew raced in the fun run.

Joshua Hill and friends made the 8 1/2 hour drive from the St. Louis area to race in the Derby. He raced in the six dog speed class and the one dog bikejor.

Hill started with one husky running alongside, moved on to rollerblades, and now travels to races with his pack of Dakari, Azura, Kaza, Max, Nova and Eliza. He said the trail was well worth the road trip.

“This trail is really nice, its really well made and wide,” he said. “There’s room to pass, its just a nice trail, one of the best I’ve been on.”

Pam Krueger traveled from Grand Rapids, Michigan to volunteer as the Dirty Dog Derby trail boss for her seventh year. She is one of the many volunteers that are indispensible to making  such an event possible, and had many positive things to say about the local organizers.

“The organizers make this an inclusive event,” Krueger raved. “If you want to race, they will help you. I enjoy the northwoods of Wisconsin. The popularity of this event draws teams from many states, even Alaska, and even a team from Canada this year.

“The excitement of the dogs is contagious. All in all, this was a wonderful weekend.”