Team Rubicon members working on a recent cleanup project in northern Wisconsin using CASE equipment donated by dealer Miller-Bradford & Risberg, based in Waukesha County. Around 70 miles of snowmobile and ATV trails had to be cleared, said Dan Soley, executive vice president of sales and marketing for Miller-Bradford.

There are times when a region requires a certain kind of relief assistance in the wake of a natural disaster.

Over the summer, Langlade and Oconto counties were hit by severe storms leaving widespread damage, including large sections of trails covered by downed trees, according to a press release from CASE construction equipment. The impacted area included many ATV and snowmobile trails critical to the area tourism economy, the release said.

Team Rubicon, a nonprofit disaster relief team that utilizes the skills of military veterans and first responders, deployed to the area for a second wave of cleanup in recent weeks. When leaders at Miller-Bradford & Risberg in Waukesha County heard about the type of equipment needed by the Team Rubicon, they signed on to help, according to CASE.

Miller-Bradford is a Sussexbased CASE dealer, and the company sent three compact track loaders and one excavator to northern Wisconsin to assist, said Dan Soley, executive vice president of sales and marketing for Miller-Bradford The equipment was used by Team Rubicon to clear miles of trails in the two counties, according to Soley.

The 10-day operation included 76 Team Rubicon volunteers, according to the release. 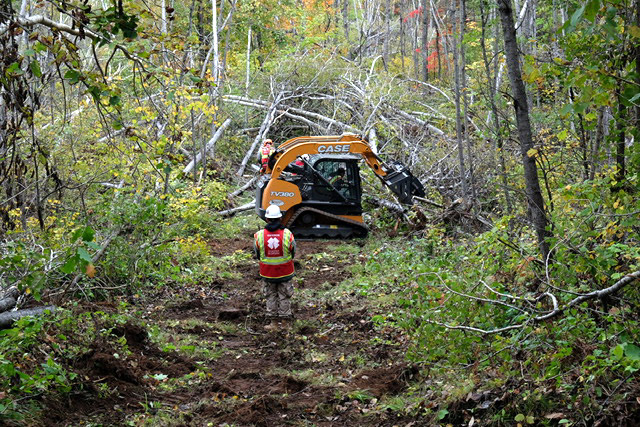 A team member walks a cleared trail as part of cleanup in northern Wisconsin. The project included clearing snowmobile and ATV trails in Oconto and Langlade counties of downed trees following summer storms, according a press release from CASE construction equipment company.

“It went very well even in light of fact (workers) still had horrendous weather to deal with,” said Soley, noting that the wet weather had continued as cleanup was ongoing, making the ground soft and particularly difficult to work on.

“I believe 70-some miles of snowmobile trails had to get cleared out. All of them are now passable, to the best of my knowledge,” said Soley, who said the project was completed a few weeks ago.

The walls of trees blocking some paths were as high as 20 feet, according to CASE construction equipment spokesman Ross Boettcher.

Responsive team
“The operation would not have been possible without the equipment,” he said, noting the ability of the machinery to work through the “tough, muddy soft earth conditions” and within tight areas on heavily wooded paths.

Soley said Miller-Bradford has worked with Team Rubicon for several years, as CASE has fostered a corporate relationship with the nonprofit relief organization. CASE is the heavy equipment sponsor for Team Rubicon, according to Boettcher.

When situations arise in need of support, Soley said CASE will spread the word to its dealer network.

“Dan and his team by far have been one of the most responsive groups. They are always willing to jump at the opportunity to help,” Boettcher said.

The recent cleanup in northern Wisconsin was one Soley said he and his brother, company president and CEO Mike Soley, felt they could help with.

“It fit with how my brother and I, as a family owned business, like to be a quality member of the community and help where we can help,” he said.

Soley noted that Miller-Bradford supports Team Rubicon’s efforts to employ and train military veterans to do this work.

“They are trained and are like a mini-army going into a battle zone,” said Soley, adding that this approach jives with Miller-Bradford’s own efforts to recruit veterans to work for the company.

With ongoing tornados in the north and flooding and hurricanes in the south, there always seems to be places where assistance with equipment can be provided, Soley said.

“Unfortunately, disasters are something that are never going to go away,” he said.

But with a headquarters in Waukesha County and a business region covering a three-state area, Soley said Miller-Bradford will continue to keep an eye out for similar regional projects where it can help Team Rubicon’s efforts.

“This will definitely continue,” he said, of the partnership. Team Rubicon “is an organization that has continued to grow their ability to help communities that have these disasters. They go through a lot of tough work clearing debris and clearing houses and help people get their lives back.”