Author:
Lisa Haefs
Source:
Antigo, the county seat of Langlade County, Wisconsin, was home to Fred Berner. A longtime editor and publisher of the Antigo Daily Journal, Fred was a key supporter of his community's efforts to develop an in-town, nonmotorized trail system. In October, just shy of three years since he died at age 71, the newest section of that network will be dedicated in his name.

"Fred was such a positive influence and offered unwavering support to our efforts to develop these trails," said Sarah Repp, director of parks and recreation for the city of Antigo. "This is our way to recognize all the wonderful things he did for the com- munity and specifically for the trail system."

The new half-mile section extends the existing trail system along the eastern edge of the Langlade County Fairgrounds, con- necting the city's core park system with north side residential and retail areas.


Starting Out & Getting it Going 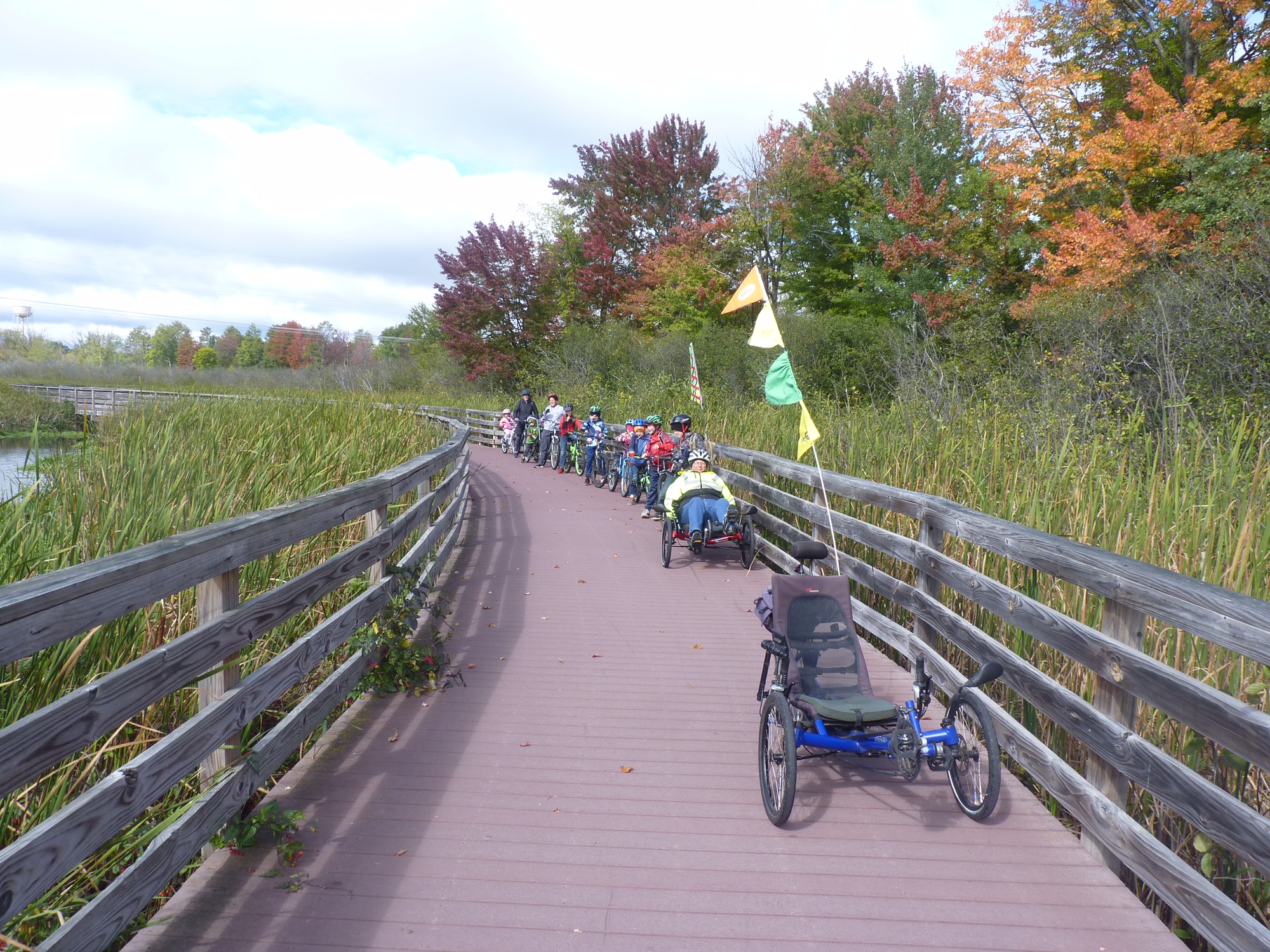 Located in Wisconsin's County of Trails, Antigo has developed an impressive network of trails and parks, mostly over the last two decades. But it did not come easily. Into the 1980s, Antigo offered typical small-town recreational opportunities. There were ball fields, a "cement pond" outdoor swimming pool, some sidewalks, and little else. There was also Antigo Lake, a weed-choked mill pond, and Springbrook Creek, a mucky stream known locally as "Sh*t Creek" - it was not an asset. Every spring, like clockwork, Fred would pen an editorial urging the cleanup of the 30-acre lake and the development of a modest trail system around its three ba- sins. Although he was fiscally conservative, he urged people to come together to clean up the trash-filled brush along the banks and suggested improvements that would bring long-range benefits to the community he loved.

Progress began in 1990 when the city undertook a massive project to dredge the muck from Antigo Lake with funding through the Inland Lake District. That turned the weedy basins into an attractive asset-and people noticed. Nine years later, Kretz Lumber Company gifted the city over thirty-five acres of land at the eastern fringe of the city. The wild area was already spiderwebbed with trails dating from the 1950s, when it was the home of the town's swimming hole, and Springbrook Creek wound its way through the area on its path to Antigo Lake. The location was ideal, but the project was daunting.

Gradually, plans were developed to connect the area to the park via a boardwalk, with funding through a mix of local and state sources. But opposition from some members of the city council and community leaders was fierce. They questioned the need for the trail system, pointing to the city's existing network of sidewalks. One alderman even worried publicly about the dangers a trail system could bring, including snapping turtles. Cost was also an issue.

"I think, back then, some people couldn't understand the value of what a trail system could bring" Repp said. "Never having been in a city with a trail system, they didn't have a concept of what it could offer to the community."

Through his newspaper, Berner was once again the voice of reason, urging the public to attend a community meeting where the project would be discussed, and a vote held. The session drew an overflow crowd to the city library. Support was obvious and the council approved the funding and moved the project forward.

"Fred and the Antigo Daily Journal re- ally were key to publicizing the plans and those meetings and getting people informed, Repp said. "He was just so supportive."

Proof in the Results

From there, things snowballed. The boardwalk - a thing of beauty 12 years later was constructed over the creek and wetland in winter, taking advantage of the frozen ground. The cow path network of trails was widened and, in many instances, paved. "Once that boardwalk was in place, the community could visit the naturally wooded and wetland areas year-round, Repp said. "People could enjoy wildlife on a scenic bike ride or a walk after work. It became a place for people to connect." 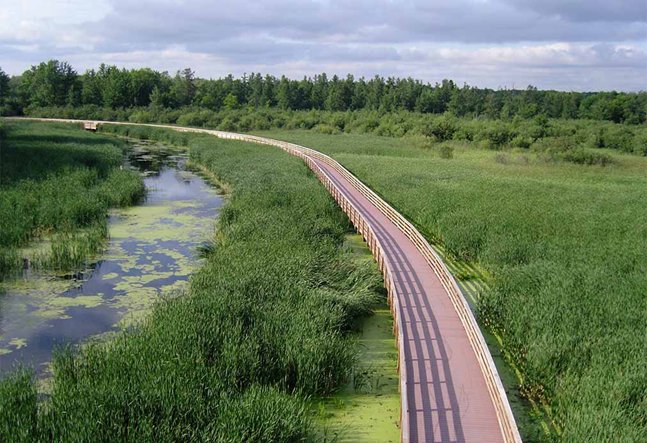 At about the same time, the Wisconsin Department of Natural Resources dedicated a series of projects to improving Springbrook Creek, including a brush bundling. The Antigo Rotary Club, with assistance from city of Antigo crews, spearheaded construction of several bridges across Springbrook Creek.project to improve water flow in 2016. The creek is classified as a class I trout stream upstream and downstream from town."It still has many issues and challenges," Dave Seibel, DNR fisheries biologist said, "including pollution from nonpoint sources, eroding croplands and livestock opera- tions."

The Antigo Rotary Club, along with the city of Antigo and Inland Lakes District, funded and constructed two bridges over lowland areas and the creek, adding scenic interest as well as increasing access. Other groups and businesses help fund a disc golf course through the area, which has been expanded in recent years from nine to eighteen holes. All of those projects were documented and supported in the pages of Fred's Antigo Daily Journal.

Four-season options were developed, including an in-town cross-country ski trail and a nearby sledding hill. Signs were cre- ated to promote new municipal bike routes, with connections to the high school across town. South of the city limits, volunteers created a single-track mountain bike trail, also open for hiking and snowshoeing, on a capped city landfill site.

"All of a sudden, people's eyes started opening, Repp said. "They started to realize what an awesome gem we have in this community."

Currently, the city's Springbrook Trail offers 2.5 miles of paved trail, just over a mile of rough trail, 420 feet of low-level boardwalk, plus the 1,800-foot raised boardwalk that meanders along the creek and wetland. There are four overlooks and two bridges and the popular Duffek Island, a pavilion and picnic area constructed with private funds in memory of business leaders Anton "Satch" Duffek and Dorothy Duffek. 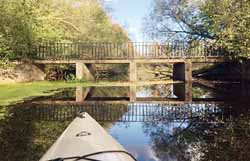 There is also educational signage detail ing Antigo's past, including a review of the one-time Rath swimming hole, a story walk sponsored by the Antigo Public Library, and a nearby butterfly garden with native plantings and educational materials.

Antigo is now home to 20 parks, ranging from pocket-sized downtown green spaces to the 140-acre single track area, nine playgrounds, six ball fields, two full- sized basketball courts, and a skateboard park. There is also a dog park, fishing at Antigo Lake and Remington Pond, bandstand, and a four-season pavilion that transforms into a covered ice-skating rink in wintertime.

It has become a place that offers outstanding in-town silent sports opportunities, with a trail network perfect for recreation while also serving as a nonmotorized connection between the northside and the downtown.

"We have a small community and you are never too far from anything" Repp said. "But before we had the trail, you always had to walk or bike on the roads, which isn't safe for anyone. This is a great way to commute safely, which is a huge advantage."

Antigo Lake and Springbrook Creek, once waterways people avoided, are now centers for recreation, silent sports, and family activities. "The boardwalk and trail system are some of the most utilized por- tions of our park system," Mayor Brandt said. "It allows the public to get close to nature within walking distance of most homes and is utilized by the school system for educational purposes."

From elite athlete to the recreationalist, nothing is missing for a family get-away.

And They Aren't Done Yet!

City officials are writing a series of grants for a trail expansion that, over the next several years, will connect the east and west sides of the community. The new route will extend to Langlade County's multi-use trail, the city's dog park, a new housing development, and Remington Lake.

Once that segment is completed, hope- fully over the next three years, the total city trail will provide 13.4 miles of on-street bike routes, 5.8 miles of paved trails and boardwalk, and 3.5 miles of secondary trails,

"The people of this community have made a huge commitment to health and wellness through their support of these trail systems, Repp said. "It's something to offer to our residents and visitors, and it's all free to use. It has really given people a new sense of pride in our community.”

Berner would be proud of what his community has accomplished - with many pushes from his well-used pen.

Three years after his death, Fred Berner continues to exert a positive influence on the community he loved. In October, the city of Antigo will dedicate the Fred Berner Memorial Trail in honor of the longtime editor of the Antigo Daily Journal. Fred died at his office desk on Nov. 25, 2019. Just 71 years old, he was planning on retiring at the end of the week with his longtime companion, Kay Schroeder, who was also capping her career at the newspaper.

"It's interesting that, after almost three years, he is still remembered in so many different ways, Kay said. "He did so many things for the community, things most people don't even know about."

Fred was not one for accolades, preferring to shine the spotlight on others through his newspaper and especially the popular Bits & Pieces column he penned every Saturday. But he surely would have gotten out the Schwinn and gone for a ped- al on the newly paved section.

Born into a newspaper family, Fred ​grew up at the Antigo Daily Journal, calling it "My sandbox." He returned home after graduating with a journalism degree from the University of Wisconsin-Eau Claire, and after a stint as editor of the Hartford Times-Press. From that day in 1972, he never wavered from his commitment to the newspaper and journalism of the high- est quality. His readers were his family; he wanted only the best for them and his community.

Fred loved being a journalist. With his camera always nearby, he chronicled the best and the worst-of Northwoods life, everything from violent storms and ter- rible tragedies to summer picnics and fes- tivities, high school graduations, and the county fair, his favorite. The ability to buy ink by the barrel and guide the community in positive directions inevitably led to a few conflicts with those of differing opin- ions, but Fred never took those differences of opinion personally.

And he was a natural mentor, guiding generations of young journalists through their own careers. Being a newspaper car- rier was the first job for many youths in the community, and Fred was proud of how they moved on to successful lives, person- ally and professionally.

In May 2020, six months after Fred's death, the Antigo Common Council unan- imously approved the resolution naming the trail section in his honor, citing his "Unwavering support of the community and various park and recreation projects and programs."

He used his platform to positively showcase our community accomplish- ments through free press, which allowed us to leverage support and funding for various projects and programs," the resolu- tion stated, adding that the naming of the new section was being done "In memory and honor of Fred Berner, someone who truly believed in our community and our community's potential."

Heady words. Fred couldn't have said it better himself. The Fred Berner Memorial Trail sign was installed in August. The back includes a short photo of the newspaperman and trail supporter.