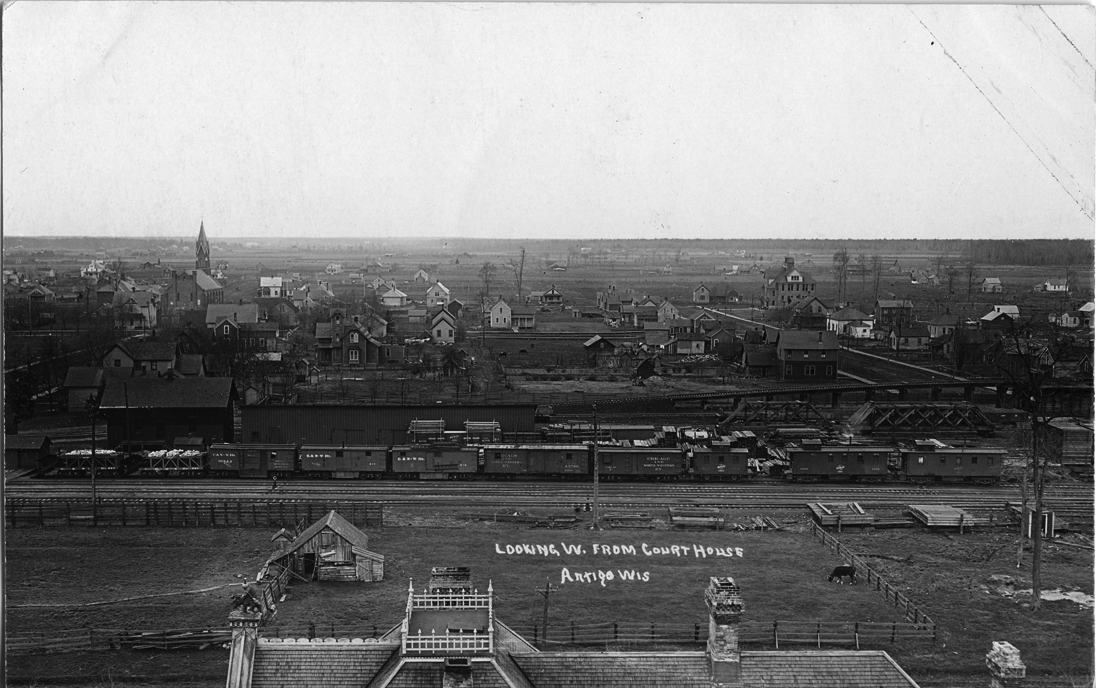 The rail yards extended from 10th Ave. to north of the courthouse
and contained many buildings required to operate and repair trains
and tracks. Seen here is the view from the courthouse roof.

On Wednesday July 13 the museum in Antigo will continue its traditional annual celebration of Antigo’s railroad history with a picnic at the museum. Click here to find out more about the Langlade County Historical Society Summer Picnic.

When Francis Deleglise settled his family in this area in 1878 in his cabin on the banks of Springbrook it was the first home in what eventually became Antigo. (That cabin has been relocated to the museum grounds.) During the next few years a handful of additional families settled in the region. But the major population centers were in the east, in Langlade and Lily, close to the Wolf River. At that time most goods travelled along rivers and the Military Road which had been constructed during and shortly after the Civil War as a path between Green Bay and Michigan’s Upper Peninsula.

Antigo’s big break came in 1881when the Milwaukee Lake Shore and Western Railroad was looking to expand from Aniwa northward 23 miles to Summit Lake. In those days choosing the path and laying track were not simple tasks. First a “locating engineer” went out on foot or horseback to assess the terrain through the dense woods and determined a feasible route. Then a survey crew staked the line. Changes were constantly being made when some grades were found to be excessive or the nature of the terrain disadvantageous for laying track. Additional problems would arise in obtaining right-of-way or easements for the line. Only then could a construction crew move in, clear a 100 foot right-of-way, and begin grading. Six horse teams would be used to rough grade, followed by finer levelling. Only then could they begin placing ties and laying track.

It was a slow process but by 1882 the line had been built all the way to Summit Lake and continued on to Three Lakes with a branch to Rhinelander. A year later an additional line was built to Neff Switch; then extended to Bryant and later to Kent. Thus within a span of about 3 years Langlade County, only created in 1880, had a fairly extensive railroad system.

Why did the original line from Aniwa come through Antigo? It was not an obvious choice. The most practical choice for construction and the first choice ran 2 miles west of town. Once again, as with many early developments in Antigo, Francis Deleglise played a role. By now he was a real estate entrepreneur rather than a surveyor and timber cruiser which first brought him from Appleton. He recognized that the presence of a railroad was vital to the growth of Antigo and would increase the value of his real estate holdings. He lobbied officials of the Milwaukee, Lake Shore and Western Railroad to reconsider their choice of a route. Clinching the deal was his offer to the railroad of 50 acres of land in Antigo for railroad facilities.

And so, on August 15, 1881, a locomotive bearing the name Milwaukee Lake Shore and Western pulled into the newly built Antigo depot. It was greeted with great fanfare and a celebration that included sandwiches and lemonade. Francis Deleglise was a strong believer and activist in the temperance movement and would not permit any stronger drink than lemonade.
From its beginnings the Antigo rail yards took on some importance. A small roundhouse was built between Third and Fourth Avenues. A wood yard, ice house, freight depot and other buildings quickly followed.

A Milwaukee Lake Shore and Western train pulled into Antigo in 1881.
It was the first train to pull into Antigo.
In 1893 the Chicago and Northwestern Railroad acquired the Milwaukee Lake Shore and Western. The next 15 tears saw a rapid growth of the railyards: additional roundhouse facilities, a new depot, new ice house, coal yard (coal had replaced wood as a fuel), an expanded freight warehouse, a machine shop, a blacksmith shop, and other buildings. In 1907 the Chicago and North Western realigned its divisions and designated Antigo as headquarters for the Ashland Division’ shifting it from Kaukauna which had become crowded with no room for expansion.

The new depot in 1907 was necessitated when the C&NW
made Antigo headquarters to its Ashland division.

In 1907 the Chicago and North Western, having taken over the MLSW,
moved the original depot north where it became the carpenters’ shop.

The railroad made Antigo an important city. Lumber companies began harvesting hardwoods and many linked their lines to the C&NW to bring lumber into Antigo. Freight and agricultural goods, as well as passengers, were directed through Antigo and on to other destinations. The major passenger trains were the “noon” trains. Locomotive 116 arrived from Ashland at 11:59am and locomotive 117 from Milwaukee at 12:01pm. There was time for a crew change, a check of the cars, filling the water tanks, and lunch for the passengers. Other routes included the “night runs” carrying passengers from Ashland, through Antigo, to Shawano and Green Bay. The trains all had a mail car, baggage car, passenger coaches and a smoker car, and often a dining car. Overnight trains also had Pullman sleepers.

An interesting C&NW feature was the “fishermen specials” from Chicago. From1917 to 1950 special trains ran through Antigo to Lake Gogebic where the C&NW operated a resort, and to Cisco Lake and Woodruff. From May 1 until Memorial Day and again from Labor Day until October 1 these trains ran only on weekends. From Memorial Day to Labor Day they operated daily except Mondays. The trains left Chicago in early evening and arrived at the lakes by early morning. They brought fishermen north and took them home with a special section in baggage for trophy fish.

Because Antigo was a crew change point many trainmen and engine crews lived here. Three line crews of 3 to 5 men were based in Antigo but travelled the line repairing the rails, keeping switches and crossings in good working order, and clearing the tracks of ice and snow. In the 1940s C&NW was the major employer in the city. Several factors led to the decline in the importance of the railroad. Improved roads meant that more freight was shipped by truck and automobiles became the preferred method of transportation for people. The impact on Antigo was further exasperated in the 1950s when the C&NW began realigning its divisions, decreasing the use of Antigo as a hub. Furthermore, diesel began replacing steam engines and the repair shops at the railyards saw less action. In 1957 engine repair operations were transferred to Iowa. Antigo’s prominence declined. The last steam engine to go through Antigo was in 1957. In 1981, the C&NW announced plans to abandon the rail line through Antigo. This was almost 100 years after Antigo’s first train, the Milwaukee Lake Shore and Western, arrived and was greeted with a celebration that included sandwiches and lemonade. 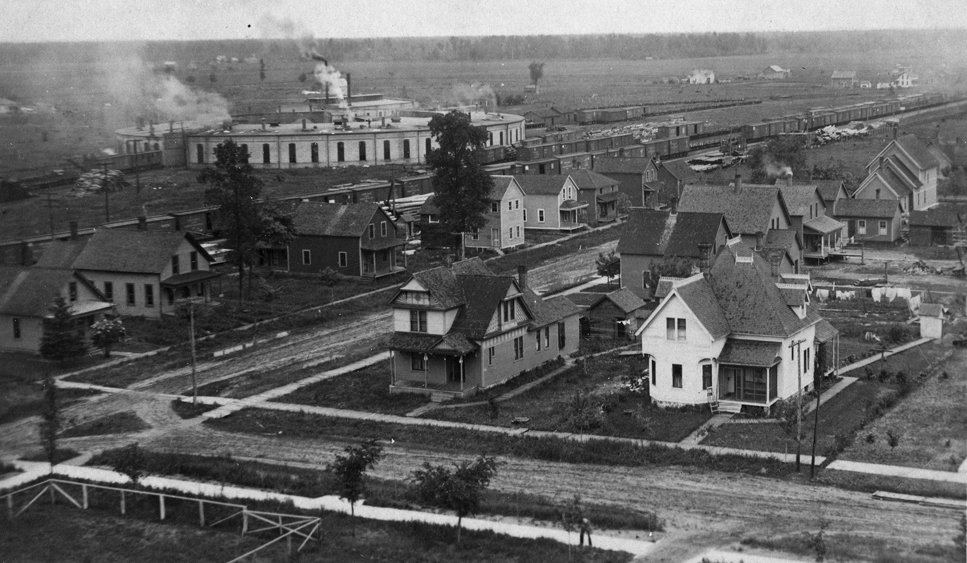 The roundhouse north of the courthouse was a landmark long after Antigo
lost its prominence as headquarters to the Ashland division.

The C&NW was by no means the only railroad line in Langlade County but it was the one that made the Antigo community thrive. Join us at the museum on Wednesday July 13 at 5:00pm to celebrate our railroad heritage.

The Langlade County Historical Society has a 20 minute video on "The Railroad and Antigo's History." Click here to watch the video.

Much of the material for this article came from 100 Years of Railroading in Langlade County by Robert J. Poss, 1982 and from Antigo: 55 Minutes for Lunch by Joseph Follmar in North Western Lines Vol 6(3) July 1979. Article written by Joe Hermolin, Langlade County Historical Society, published in the July 2016 Prime Time Edition of the Antigo Daily Journal.