After Much Planning, Street Project Gets Underway

After over a year of planning, the heavy equipment is scheduled to begin clawing into Fifth Avenue this week.

Crews from A-1 Excavating, the general contractor, are scheduled to begin work on Tuesday, June 9, 2020, a date pushed back several times since it was initially announced for mid-May. Completion is still planned for late October.

Work on the $4.5 million project will commence this week in the 700 block of Fifth Avenue and city officials predict the pavement removal will proceed quickly, taking only a couple days.

The project will gradually envelop the avenue west to Lincoln Street—a four block area—including replacement of pavement, and the various underground components such as water and sewer mains.

The main concerns revolve around maintaining the businesses that line the main thoroughfare, officials said.

Over the past week, city crews have prepared and installed directional signs indicating the best way to access downtown businesses utilizing side streets and the back parking lots. 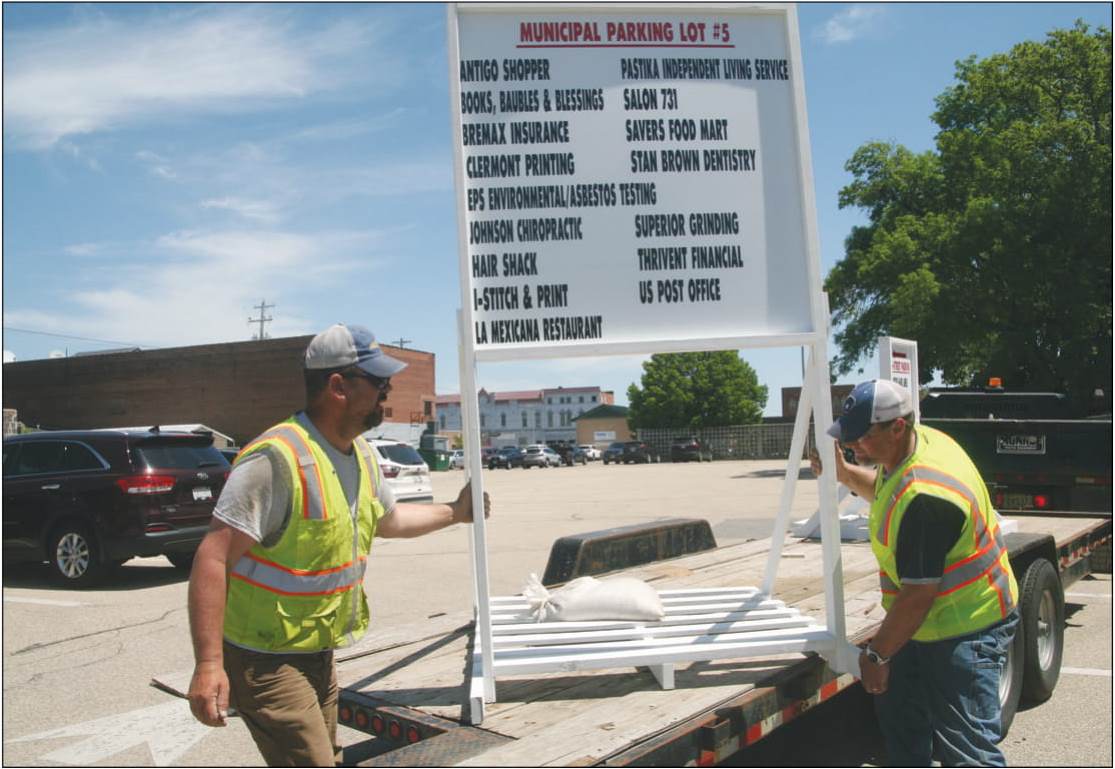 City crews prepare to unload one of the new directional signs that will guide access
to downtown businesses from the back parking lots as the Fifth Avenue reconstruction
project gets underway this week.
“We’re encouraging everyone to please use the alley entrances if possible,” City Administrator Mark Desotell said.

Officials have also been keeping businesses and residents informed through weekly newsletters, which will include regular updates from Wednesday meetings, as the massive project advances through the summer and into fall.

Changes will be dramatic, with the current four-lane configuration reduced to three, including a center turn lane and a single lane for through traffic. That will allow for left turns at the various intersections and into driveways and will also be available for snow removal purposes in winter.

In addition, in the summertime the center lane in the middle of the 700 and 800 blocks could also house heavy-duty planters, which would be hauled in by frontend loaders with decorative foliage, creating a boulevard feel without raised medians. Those would be removed in winter.

The current parallel parking configuration will be replaced with an asymmetrical design and includes removal of the unpopular bump-outs. It will create parallel parking on the one side of the street and diagonal parking on the other, altering between the north and south sides depending on the block. That will increase the number of stalls from 100 now to 175. There would be no change in sidewalk width.

Plans call for the diagonal parking to be on the north side of Superior Street in the 700 block of downtown, switching to the south side in the 800, 900 and 1000 block.

Funding is through a mix of local and state and federal grant dollars along with some borrowing.