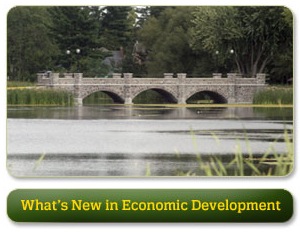 Langlade County, originally named New County was attached to Shawano County for administrative and judicial purposes until the population had increased to over one-thousand residents. The name New was changed to Langlade to honor Charles de Langlade, a noted officer in both the French and Indian and Revolutionary Wars who settled in Green Bay.
Early on logging was the principal industry in Langlade County. River channels were improved by various private companies. Logs were floated down the Wolf River to Shawano and Oshkosh and on the Eau Claire to Wausau.

Agriculture in Langlade County began as a supplemental occupation to logging. The loggers found it impractical to drive out of the timbered areas after winter logging or to haul in feed. Areas were cleared for pasture and wild hay production. Today, both potato and dairy production is the county's agricultural foundation. Langlade County's population is around 20,000 today. Our highways serving

Langlade County are US Hwys 45, 47, 64 and 55. Our three industrial parks are located in the City of Antigo, Elcho, north on Hwy 45 and the Village of White Lake, County M south of State Highway 64 in eastern Langlade County, two miles west of the prestigious Wolf River.

Our residents are very proud of their home here in Langlade County. There are many organizations, businesses and volunteers that help make this county prosper.

WHAT LANGLADE COUNTY ECONOMIC DEVELOPMENT DOES FOR YOU

The purpose for the Langlade County Economic Development Corporation is exclusively for the civic betterment and economic development of Langlade County, Wisconsin, through the attraction and expansion of new and existing industrial, recreational and commercial enterprises. A county-wide marketing strategy is used to attract new industry to the area focusing on education, workforce development, area industries and recreation.

We invite you to visit our county and see why so many people call it home. We encourage you to contact us with any questions you may have.